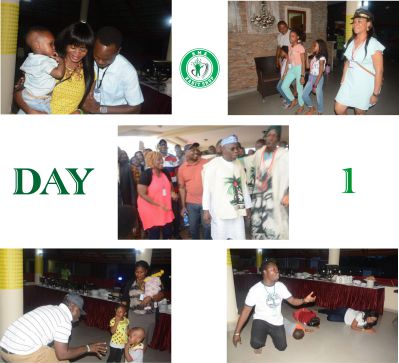 As the saying goes it can only get better, this was the reality of Family Alive Boot Camp 2017.

The journey kicked off from Lagos to Abeokuta and despite the heavy traffic and huddles met on the way, the families arrived safely at the Green Legacy Resort, Abeokuta.

What an awesome reception! The families settled into their rooms, unpacked and freshened up before moving out for lunch in the Resorts cafeteria. Just after lunch, the families were welcomed officially by Ngee & Rich [founders of Keeping Marriage Alive Initiative] and intimated on their family task for the day [Family Folklore] as they adjourned the activities till evening for the families to rehearse and take a rest.

The activities finally kicked off by 6.30pm at Green Legacy’s Gazebo Bar. The folklore – a family tales by moon light graded game; engineered to teach and show creativity, teamwork, fun and moral lessons,  brought out the best of the families as they infused drama, songs, dance and cultural/family values in their stories for the night.

Day 2 started with morning exercise activities for families. The Exercise routine kicked off by 7.30am with Rich [Dr Richard Okonkwo] coordinating the exercise session plus tug of war between families, sack race and so much more. By 11.45am after the breakfast and refreshment, the telematch games began. The telematch presented 7 challenges to all families with aim to instill insight, teamwork, patience, morals, fun, creativity, and family values in the participants. With great competitive spirit the families scaled through the challenges and each family gave a wonderful presentation at the end of the telematch.

The wives/women then took the platform just after the children’s performance and showcased a spectacular drama on the importance of women’s counsel, support and roles in the home. They ended their performance with 2 songs celebrating and thanking their husbands for allowing them blossom in their homes.

The husbands/men took the platform and gave elevating speeches about their wives, celebrating the women they married. They ended their performance as well with a song as they danced with their wives.

The night got deeper with the couples and children timeout session; the children were taken into a hall to watch movies while the couples had a timeout with Ngee & Rich tagged “The Couples Koko Night”- discussing crucial marital issues that had been kept buried in each couples marriage and arriving at how to work and improve their marriages. It ended with each couple performing a romantic task together, the aim was to induce intimacy, bonding, friendship and much more.

The families came out for their last gathering on day 3 and they listened to a brief exhortation from Ngee as she spoke about the reason for the season; understanding why Jesus Christ died for us and celebrating His resurrection.

The results of the task and activities were announced and the top 3 families competing for KMA’s Close-knit Family Award 2017 were declared – The Babatunde Family, Soetan Family and Onwudiwe Family respectively.

All families received their certificate of participation and went forward to have collective group pictures at the rock top and some families continued to Olumo rock for sightseeing.

If there had been a way to extend the holidays, families testified they would have loved to stay back for an extension. The program was a remarkable one in all.