HomeFinding Strength in the midst of the storm. 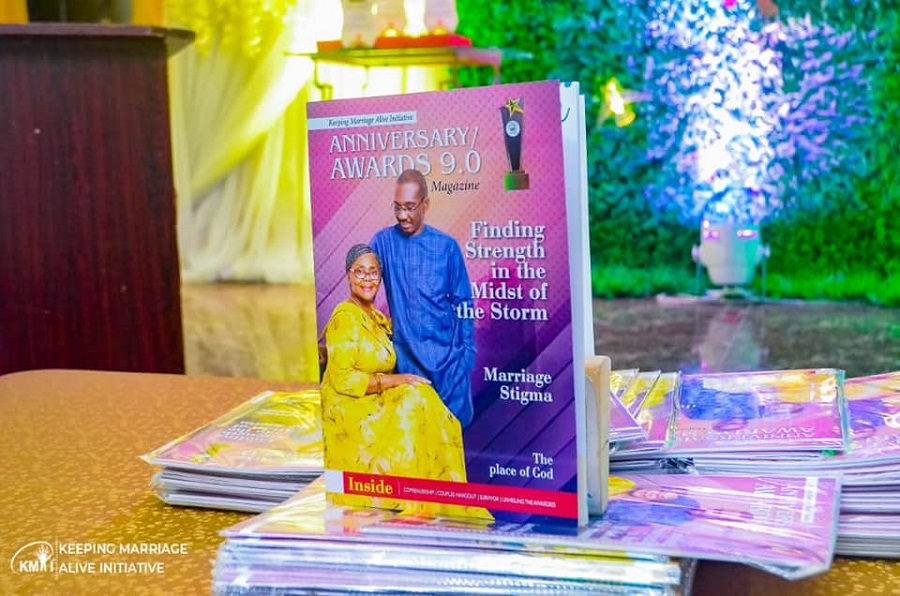 Finding Strength in the midst of the storm.

Ngee & Rich0 comments
On Sunday, 26th June, 2022, 𝐊𝐞𝐞𝐩𝐢𝐧𝐠 𝐌𝐚𝐫𝐫𝐢𝐚𝐠𝐞 𝐀𝐥𝐢𝐯𝐞 𝐈𝐧𝐢𝐭𝐢𝐚𝐭𝐢𝐯𝐞 celebrated their 9years anniversary and awarded some individuals and organisations who have impacted their families and community.
This year’s KMAI Anniversary and AWARDS was all about ‘𝐅𝐢𝐧𝐝𝐢𝐧𝐠 𝐒𝐭𝐫𝐞𝐧𝐠𝐭𝐡 𝐢𝐧 𝐭𝐡𝐞 𝐦𝐢𝐝𝐬𝐭 𝐨𝐟 𝐭𝐡𝐞 𝐬𝐭𝐨𝐫𝐦’.

Also, the magazine was launched, which contained the amazing stories of the awardees and different perspectives of combating societal ills, remarriage, family, parenting and health issues like cancer and geriatrics.
Some other highlights were; the fashion show and Raffle draw, were gifts like mini fan, toaster, phone and different kinds of gifts were won.
It was indeed a transformational event of sharing stories, celebrations and learnings.
Truly, one can say that KMAI Anniversary and Awards 9.0 was all about life and how to understand and navigate through these storms and become a light and hope for others.

Our major partners/sponsors:
You can still order for a copy of the magazine by texting/chatting-+2347088765212.
https://www.facebook.com/140243052825902/posts/pfbid0nviTx9Q4aX8UMUpuvnPbEmJkkkMdikNbmjTxzQsQasEmDgRZTH2AMEd6BEyqa1zul/?sfnsn=scwspmo