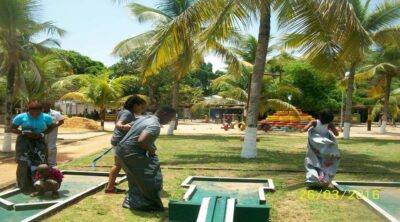 Ngee & Rich0 comments
In the peak season of the Easter Celebration 2018, KMA hosted it’s annual family vacation tagged FAB CAMP at Green Legacy Resort, Abeokuta.
The event hosted 10 families and a total number of 46 participants; during the 3 days camping.
The program kicked off on Friday 30th April 2018 with a convoy from KMA office to the resort at Abeokuta. On arrival, the guest took their lunch and later checked in for unpacking and resting before the evening games.
The night was one to be remembered as KMA unveiled and played their Family DNA BOARD GAME; the game had 8 families compete with each other by rolling of dice, answering trivia and community questions, getting promotions, reduction by penalties and much more.
The guests had an assurance that they were in for a great time and power packed program. After dinner, families were given privilege to go to bed early against Saturday programs.
Saturday kicked off with general exercises and went further into a 5 aside match between the boys and girls and later the adults in a mixed game.
The jump rope competition followed immediately after the football match.
The telematch competition came on later in the day in 2 forms:
– Artwork Challenge: the game was created to challenge each families ability to be creative and utilize raw materials and what they have to create a master piece of artwork. It was a way of teaching the uniqueness of relationships and the ingredients needed to sustain the family unit.
– The second phase; the families were divided into 2 nations and asked to complete a Lego construction of submarine and cargo ship respectively. With common opportunities, resources and instructions; the nations were meant to choose a president who will negotiate and delegate duties. After 40 minutes of constructive building, Nation A won the competition by completing their submarine buildup.
The families were giving 3 hours family time break after their lunch and most families utilized the time for recreational and relaxation activities.
The evening was special for couples; having a date night, exchange of love letters by spouse, teaching from Ngee and Rich rounded up on the different sides of your spouse and a romantic night tagged “Just the 2 of us”.
Children designed appreciation and love cards for their parents  while the couples were having their date night.
The event was wrapped up with a short teaching about Easter from Ngee and Rich followed by prayer time where couples prayed for their children, spouse prayed for their partners and children prayed for their parents.
Certificates of participation were presented to each family and a group picture was taken to round up the event on Easter Sunday.
Once again, in the race to build a strong marriage, strong family and healthy society; KMA has utilized FAB CAMP 5.0 to send an unforgettable message, leaving a lasting imprint on the hearts of all families in attendance.
Kudos.
Compiled by
Philip Ekundayo
Admin – KMA